The infraction should have given the Leafs a player play on which they (as their faithful fans attest each May) would surely have scored to clinch the series. Afterward, the cup—their first cup since 1967—would have been theirs.

Sadly, this was not to be.

Instead, the Kings prevailed, leaving Leafs fans to berate Kerry Fraser every May 27.

Since almost every angle of this story has been covered, I’m focusing on a less discussed topic. If you want a thorough analysis of what happened that fateful night in May, check out posts on the subject by Sean McIndoe (a.k.a. Down Goes Brown).

Fraser has stated that he has had to carry that game with him as figurative baggage over the last twenty years. He doesn't hold on to the memory himself; rather, bitter fans force him to bear their disappoint for life.
In light of these comments, I thought I’d offer a list of ways in which the memory of that incident might be haunting Fraser and how he might deal with the burden of that memory.

1. Attempting to get absolution

Immediately following the blown call, Fraser acted like any of us would and sought to absolve himself of his heinous trespass by seeking absolution from the Oracle of Apollo at Delphi.

Unfortunately, the oracle informed him that while the classical hero Orestes could be forgiven for matricide, Fraser's offence was beyond the power of gods or men to forgive. Immediately afterward, a plague of Furies rose from the underworld to torment the forsaken ref from that day onward. 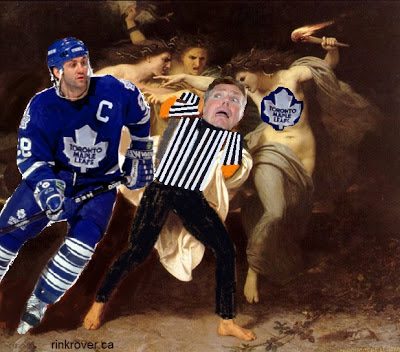 If you'd like to know what exactly "Furies" are, check out my previous post on the awesomest team in the CWHL: The Toronto Furies!

2. Scarring himself for life as an act of penance

An anonymous Bazooka Joe comic informed me that, immediately following the blown call, Fraser went into a black mood and was irreconcilable for weeks. During that time, he apparently decided to give himself jailhouse-style tattoos as a reminder of his crime against the Leafs and, by extension, humanity itself. He usually covers these tats with makeup, but I've put together an artistic rendition of what they might look like. 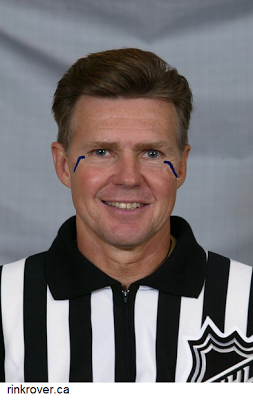 He has a high stick inked under each eye that missed the obvious call on Gretzky for the stick infraction.

Having hit rock bottom in the 1993 offseason, Fraser eventually decided to seek help so that he could return to officiating in the next season.Since that summer, Fraser has attended a support group for people who have blown big moments in the history of sport. He's sponsored by Bill Buckner who is also the founder of the group. Here's a pamphlet advertising the organization. 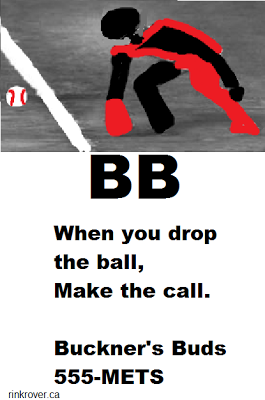 Buckner chose this phone number because, even if he forgets everything else that happened to him in life, no one will fail to remind him that he handed--or gloved--the 1986 World Series to the Mets.

As part of his 12-step program with BB, Fraser has to make amends for having hurt people by his actions. On the top of his list is being forgiven by Wendel Clark, who led the Leafs to a glorious comeback in that fateful Game 6 by tying the game with a hat trick. That accomplishment, however, was ultimately rendered moot by Fraser's poor officiating.

To honour Clark's achievement and express remorse for diminishing its significance, Fraser throws vagrant hats that he's collected during the year on Wendel Clark's lawn every 27th of May. Of course, Fraser, acting on survival instincts, doesn't dare alert Clark that he's anywhere near his property, so the anonymous hat-bombings have been fruitless thus far in terms of making amends. 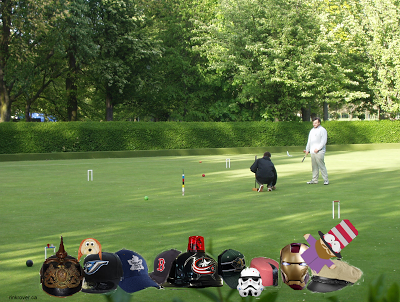 While Fraser tries to make amends with Clark, he tries to avoid Dion Phaneuf at all costs. Apparently, an apparition of Doug Gilmour appears before Phaneuf at night to remind him that the "time is out of joint," meaning that the Leafs should have won the cup in 1993. The apparition tells Phaneuf that he must avenge this loss and right history by winning a cup for the Leafs that year.

Unfortunately, the apparition's plan has so far backfired horribly. Instead of rallying the team to undertake a long cup run, Phaneuf stages plays that implicate Fraser (who is usually seated in the audience) with having killed the hopes and dreams of Leafs Nation. Thankfully for viewers at home, the NHL schedules this annual pageant during commercial breaks at the seldom-watched NHL Awards.

Another unexpected side effect is that Phaneuf doesn't offer any motivation in the dressing room anymore. Instead, he just stares at a skull and philosophizes on how  death takes those who do and do not win cups alike: to him, the true face of humanity is a naked, anonymous skull.

These dressing-room digressions have likely led to reporters saying that Phaneuf shouldn't wear the "C" anymore. 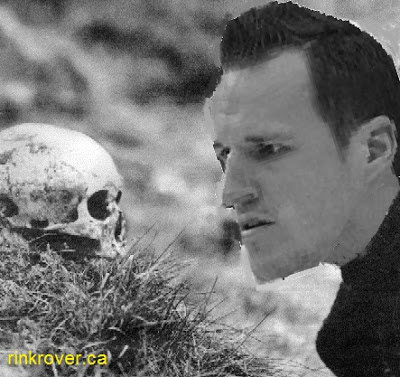 You can tell when Phaneuf is having a "Hamlet moment" on the ice as he acts like a pylon in the d-zone while contemplating whether 'tis nobler of the mind to suffer the slings and arrows of outrageous cup droughts.

In response to Phaneuf's annual dramatic lambasting of him, Fraser often holes himself up in his dressing room at TSN's studios. His contract allows for his frequent absences from the network's panels through a "Kerry time" clause, which stipulates that he can retreat into his dressing room at any time for as long as he wants.

This type of timeout usually involves Fraser putting on his best Uggs or Crocs (depending on the season), making origami cranes out of the official NHL rule book, and listening to an endless loop of Johnny Cash's cover of "Hurt." 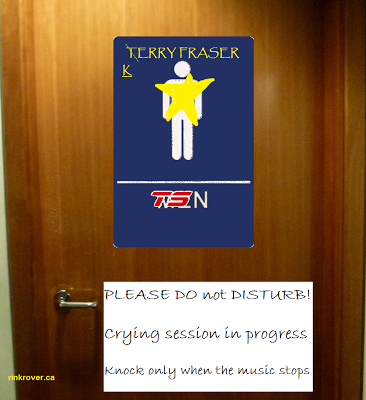 Network pages sent to collect Fraser from his make-shift dressing room are often turned away by this sign.

This year, Fraser has finally accepted that the memory of his missed call will never die. So, instead of fighting against a collective's grudge against him, he's decided to mourn with Leafs nation by staging an annual memorial outside of the LA Forum (the site of the Leafs greatest misfortune aside from that OT loss in the 2013 playoffs).

Fans are welcomed to join Fraser in his observance of that dark day by contributing decorations that mark the 27th of May as an National Day of Mourning for Leafs Nation. 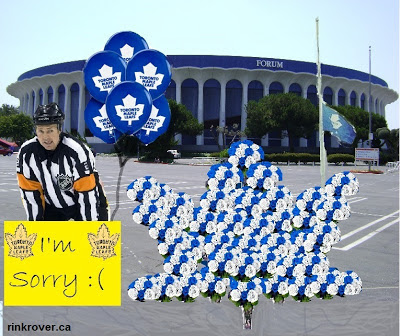