Other bloggers have offered great analyses of whether or not the Leafs should re-sign pending UFA Tyler Bozak, who has played the last few seasons as the Leafs' (de facto) first-line centre. If you want to read more about this debate, I recommend that you check out articles by Cam Charron and Jeff Veillette from theleafsnation.com.

To offer something completely different, I'm not going to try to persuade you into agreeing that the Leafs should or should not make a new deal with Bozak. Instead, I'm offering a dramatic pre-enactment of how I imagine the main push of contract negotiations will go.

In my imaginings, serious contract talks will contain the same levels of profanity, coercion, intimidation, and aggravated assault as in the (not-an-adult-film-despite-its-title) movie Sexy Beast (2000), so I'm going to use quotes, screen caps, and gifs from that movie in the following dramatization.

For those unfamiliar with the movie, Sexy Beast stars an absolutely terrifying, very un-Gandhi-like Ben Kingsley as a mobster who pressures his former associate Gal (played by Ray Winstone) to come out of retirement for one last job.

The movie is perhaps most famous for preempting Donnie Darko with a far more nightmarish bunny. 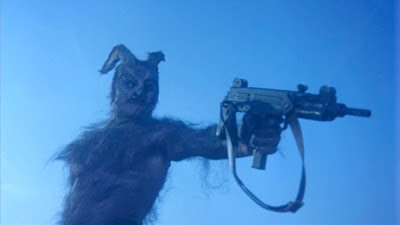 Tyler Bozak: A pending UFA enjoying his summer of leisure before the General Manager of his team barges into his home and begins hostile negotiations. Role played by Ray Winstone.

Dave Nonis: A maniacal GM who uses various psychological and physical forms of abuse to pressure his personnel  into agreeing to his contract terms. Role played by Ben Kingsley.

Deedee: Bozak's pool boy (who bears a striking resemblance to Bozak himself).

Scene 1: By Tyler Bozak's  pool. Some time in June. Morning.

The scene begins with a closeup of Bozak as he lounges the days away poolside in the warm climes of his native Regina, Saskatchewan.

Tyler Bozak: Man, it's hot. Searing hot. I'm basically peameal bacon at this point--sizzling away in the frying pan. Who could even think of hockey at a time like this? I'd melt through the ice if they put me in the rink right now. Hockey--who needs it on a day like today? 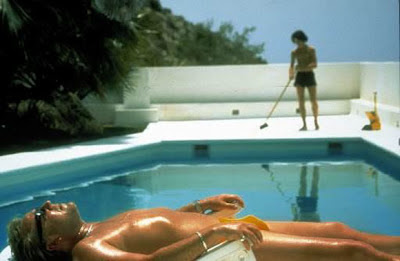 Tyler Bozak: Deedee, are there any messages for me?

Deedee: (Attending the pool while looking like Tyler Bozak): Yes, Dave Nonis says that he's coming by to discuss your contract. 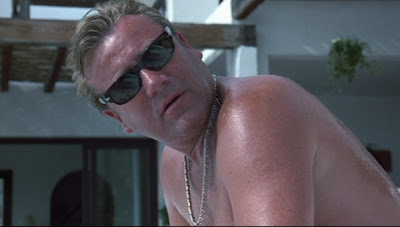 Bozak: Dave? He's coming here in person? Did he say why he's not discussing things with my agent?

Deedee: Dave said that contract talks broke down shortly after he put your agent in the hospital. He said that the two of you can work things out without an agent.

Deedee: This afternoon, and he plans to stay here until the contract extension is finalized. 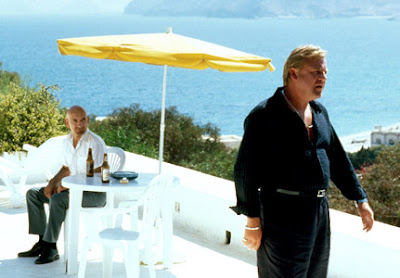 Nonis: Why won't you play 3rd or 4th line centre so that we can promote Kadri or Colborne? Why don't you want to see young players--young like you used to be--promoted and given a chance? Why do you think we should push them out of the organization for you?

Nonis: Useless? In what way?

Bozak: In every effing way!

Nonis: (Feigning surprise) Why are you swearing? I'm not swearing. (Warmly) Talk to me, Bozie. I'm a good listener.

Bozak: What can I say, Dave? I've said it all: longer term, more money, top-line minutes.

Nonis: (Seething but composed) Shut up. (Pause). Sit down.

Nonis: (Speaking pleasantly as though nothing has happened) We're at 2 million. I may go two-and-a-half, maybe even three. It all depends on the usual cap issues. But it's not about the money with you and me is it, Bozie? It's the charge; it's the bolt; it's the sheer joy of playing in the NHL. Amirite?

Scene 3: That night. Nonis and Bozak walk around the grounds of Bozak's prairie home.

Bozak: It's not that I want to walk, Dave. But with your terms, I'd rather test free agency for a deal that makes sense. 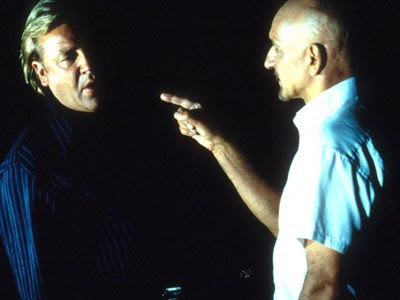 Dave: Quite frankly, your attitude appalls me. It's not what you're saying. It's all this stuff you're not saying. Insinnuendos. Testing the free-agent market? You louse. You got some effing neck, ain't you? Looking for a deal that makes sense? You're revolting on me!

Bozak: No, I just want to get paid like other top-line centres, which is what the Leafs have trained me to be. If I can't find that money in Toronto, then I'll look elsewhere.

Nonis puts Bozak in a headlock. 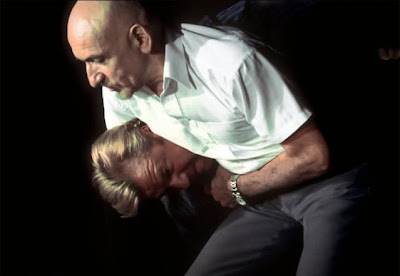 Nonis: (Shouting) What, you think this is the Wheel of Fortune? You think you can take your dough from us and eff off? Leave the table? "Thanks Dave, see you Dave, off to sunny Regina now Dave, eff off Dave." Lying in your pool like peameal bacon laughing at me? You think I'm going to have that?

Pause. Bozak continues to struggle in a headlock.

Nonis: (Speaking in a restrained manner while he grapples Bozak): All right, I'll make it easy for you. Are you gonna sign the contract? (Bozak tries to respond "no" but the headlock is too tight.) It's not a difficult question, are you gonna sign, yes or no? (Bozak again tries to speak.) Fine, we'll talk about it in the morning when you're calm enough to speak properly.

Scene 4: The next morning in Bozak's kitchen.

Nonis: Tell me what you want?

Bozak: I want a long-term extension and 5 million per year.

This exchange repeats until that evening.

Scene 5: After talks in the kitchen break off, Nonis agrees to go out for the evening to let things cool down. Bozak is entertaining friends in his home when Nonis suddenly crashes the gathering to make one final push to re-sign Bozak.

Bozak: Look, Dave, I was thinking of re-signing for less before you showed up, but now I plan to leave the Leafs no matter how much you'll pay me.

Epilogue: The rest of the summer is dragged out by Nonis committing various, repeated acts of domestic destruction until Bozak signs, or Nonis is sent to prison for wrongfully and forcibly confining himself to Bozak's home.