5 Most Amusing NHL Items Sold by Target and/or Walmart

This post focuses on strange but real objects that I found advertised at Target and Walmart. Unless I specify in the blog, the images below have not been altered with MS Paint. 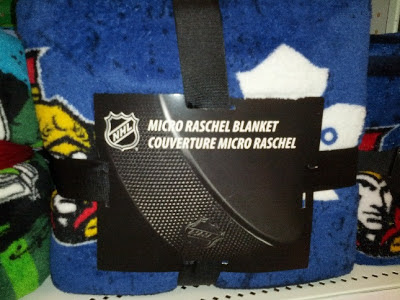 Behold the blanket that inspired this post. I was at Target on the weekend, saw this for sale, and immediately thought, "A blanket that juxtaposes the logos of both Ontario teams? Will mobs of Sens fans petition Target to remove this item before its stores in Ottawa have even opened?" It's happened before.

Maybe Target could simply appease Sens fans by replacing the Leafs logo with a palm tree; that worked for The Beatles when fears of a backlash in India prompted them to have Gandhi's likeness painted out of the cover of Sgt. Pepper's Lonely Hearts Club Band. Doing so would mean that we can officially upgrade Leafs nation to Leafs Empire since it must conduct business mindful of how products might offend its former sports colonies such as Ottawa.

But this item actually contains more controversy than meets the eye. If you reverse it, you'll see the logos of the other Canadian teams. I couldn't tell if they included the Jets logo, an Atlanta Thrashers logo, or just left that franchise off the blanket altogether. If I were in charge of marketing, I'd probably add a logo to the blanket that looked like this: 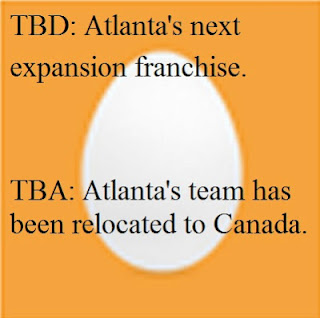 By including each team's logo together, the makers of the blanket have created a false impression of Canadian hockey multiculturalism. Their product suggests that consumers would be inclined to give or receive a blanket that mingled all of our country’s teams together as though they were each on par with and deserving of the same respect as the others.

I hope no one gives this blanket to kids. The thought of young Canadians being subliminally programmed to respect or even root for all of Canada's teams as equals makes me weep for the next generation. They seem doomed to live in a dystopian future wherein this snugly propaganda has undermined each fanbase and, as a result, has also eliminated that special feeling we all get when our team plunges a geographical rival into levels of abject despair and loathing that threaten the very fabric of confederation.

No longer will we see rivals heap further scorn upon a humiliated rival by insisting that they must put partisanship aside and rally around their nemesis because it (insert whatever never-convincing reason we’re using this postseason) is “Canada’s team.” This blanket is trying to suppress a timeless tradition that Canadians observe each spring.

Or maybe this product requires those feelings of bitter hatred toward other Canadians in order to work. It's not a particularly warm blanket, so it's probably designed to keep Canadians from freezing in the bleak midwinter by stoking their internal furnaces of fan fury.

He's played for 1/3 of the league, and yet not for a single Canadian team. I imagine he was probably drafted by a Canadian team but refused to report to camp in protest of Canada's copyright laws.

This merchandise poses a strange question to consumers: how can we make sense of the sheer number of teams on which Mickey has played? The logical assumption would be that (like many other well-traveled hockey players) Mickey is an enforcer.

Looking back, we probably shouldn't be surprised since Mickey has a violent past. Here's a picture of him nearly murdering Pluto on Christmas. 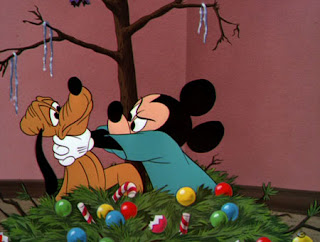 Based on the fact that Pluto isn't fighting back and his face expresses no signs of surprise, we can conclude that this is merely the latest beating that Pluto has received from his tyrannical rodent overlord.

One problem, however, with this theory is the fact that Mickey is wearing a captain's "C" on each jersey. Would one let alone ten NHL teams make a journeyman enforcer into a captain?

At first I thought that Mickey may have started as a star player on one team. As his athletic ability waned, Mickey lost the ability to find the back of the net, so he gave up on chipping in rebounds and focused instead on knocking out teeth.

But in each picture, Mickey wears the same number ("00"), which is usually reserved for mascots or other non-players. So are teams mocking the mouse by giving him this number and the captain's initial?

Or maybe Mickey is the one making a mockery out of another player. Serving as captain on ten different teams suggests that his playing career is longer than anyone else's to date. If he's still able to perform well enough to be a captain after decades of service, perhaps Mickey presumed that he would have such indefatigable athletic ability, and so he chose as a number that would indicate his intent to one up Gretzky: his "00" might actually stand for "100" (meaning Mickey's one above #99). 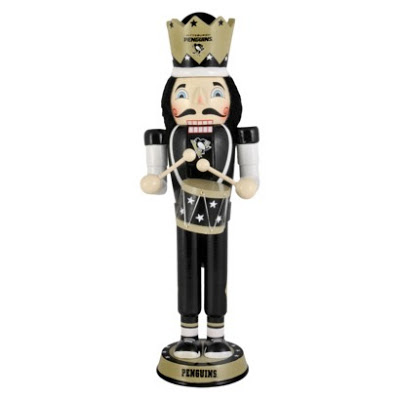 Upon seeing this nutcracker, my mind immediately spun an old wives' tale about it.

A fan, whose love of the Penguins is only rivaled by his love of freshly-cracked nuts, refused to pack this Christmas present away with the other decorations after the holiday season had ended. Instead, he kept his armchair companion with him through the shortened season, downing pecans aplenty while the Penguins downed their opponents.

Then during one game, he put a particularly tough nut into his inanimate intimate's jaws and cranked the handle only to hear a gut-wrenching crunch as the nutcracker's teeth and jaw broke. At that moment, the fan looked up at the TV to see Brooks Orpik's errant shot hit Crosby right in the jaw. The nutcracker was some sort of holiday-themed voodoo doll.

Following this misfortune, the distraught Pens partisan told his fans never to use their NHL nutcrackers on nuts. Luckily for them, Target offers a more suitable item for Pens fans to to break in the nutcracker's jaws. 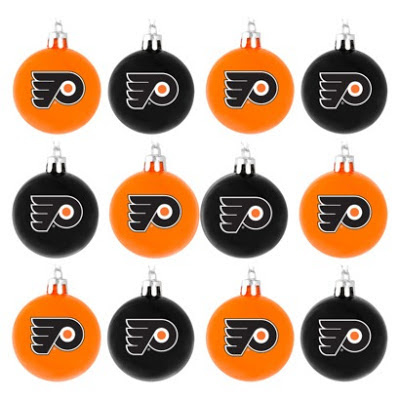 4. A failed opportunity to give the Rangers an awesome mascot

Target offers a series of plush mascots called "Pillow Pets." Each one is modeled after a team's actual mascot, which works well with the bear mascots such as Blades the Bruin and Louie (the St. Louis Blues' blue polar bear), but less so with the self-evidently un-cuddly S.J. Sharkie. 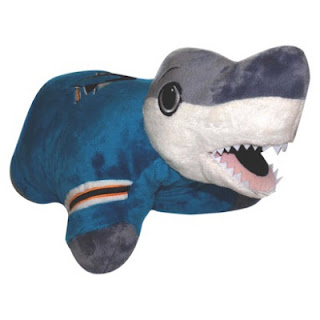 You're gonna need a bigger bed.

The one exception in this line is the Rangers' pillow pet. The Rangers have no official mascot, so the toy's creators had to come up with something that would suit the team and reflect its distinct identity. They pooled their creative energies together for days before deciding on--wait for it--another effing bear. 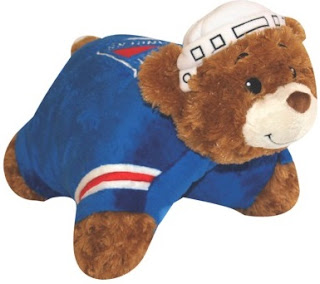 Since the league already has 4 bear mascots and this bear doesn't say anything about the team, the makers have missed a golden opportunity to make a lasting impression on the Rangers' fanbase. Imagine the royalties they could have reaped if New York had decided to adopt the mascot put forward by the pillow-pet producers.

If I had creative control on this portfolio, I would have developed this prototype. 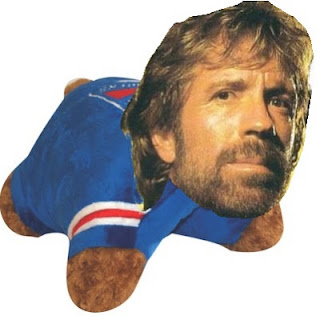 Catch phrase (modified from the movie Invasion USA: "If you come back in MSG, I'll hit you with so many rights you'll be begging for a left."

So Chuck Norris (or "Walker, New York Ranger") gives the Rangers a unique, fierce mascot that also reminds them that their team's name is absurdly incoherent with New York itself.

I could write an entire post on the various gnomes that one could buy at Target. Here are the most absurd items from the store's extensive collection of sports gnomes. 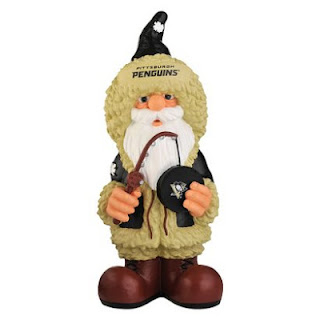 What, exactly, does the Penguins gnome hope to catch by hooking a puck to his fishing pole? Is this a metaphor for the Pens failing to reel in the prized catch (the cup) because they use the wrong bait (the current lineup)? Does the imagery of plunging a puck into water suggest that the Pens are always angling for an advantage by diving? Do people in Pittsburgh often have hockey games on in the background as they go on fishing expeditions? What is the connection here? 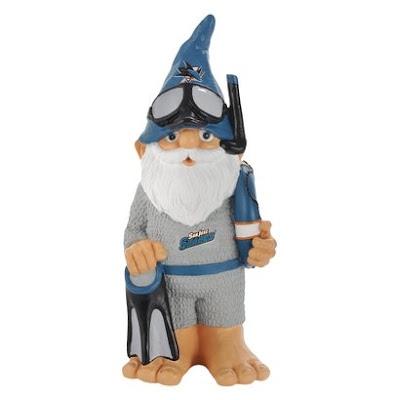 Okay, the Sharks gnome is a bit more relevant to the team, but he still poses some unsettling questions. Is the gnome so senile that he thinks he must wear SCUBA gear to see games at the arena affectionately referred to as the "Shark Tank" in San Jose? Does he belong to some deranged sect of San Jose fans that believe one must become one with a shark to be a true patriot of the team?

Or perhaps he believes that he must kill a shark Jaws-style in order to be a true fan. Notice that he's carrying an oxygen tank but there's no breathing apparatus attached? It seems like his plan is to use the snorkel gear to locate a shark and then blow it up with the oxygen tank. This theme of gnomes inhumanely slaughtering his team's namesake is more fully developed in the next example. 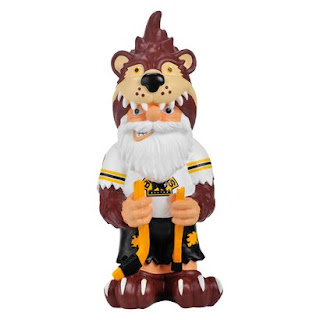 Not to pat myself on the back, but this gnome looks like my Brendan Gallagher poster in which the Habs rookie wears Spartacat's head as a war mantle. Here, however, we're supposed to believe that a guy who has clearly killed a bear (and is now wearing its hide as a headdress, fur shirt, and slippers) is a Bruins fan. I don't think anyone in TD Garden would be happy sitting near a guy wearing a dead bear.

In trying to understand what this gnome is all about, I focused mostly on his attire. Wearing shirts made out of coarse animal hair is an old religious practice used to induce pain in the wearer as a form of penance. So has this gnome made this archaic practice part of his way of life as a Bruins cultist? Does he wear the shirt as penance for the Bruins not winning a cup last year?

Whatever his reasons might be, this gnome truly reminds us that the word "fan" comes from "fanatic." I'm not, however, entirely convinced  that he even likes hockey. If he did, why would he snap a stick in two with his bare hands? Also, why isn't he wearing bear hands? Is it possible that he breaks the stick as the central sacrament in his hockey Eucharist?

Okay, I'm just going to walk away from this issue because this gnome just gets creepier and creepier the more I try to reconstruct its backstory.