Some see fighting in hockey as a longstanding, integral part of the game, and others argue that it is a pointless sideshow that detracts from the main event. What if there was a way to appease both of these groups by enhancing the role of fighting in hockey while also making fights more meaningful--indeed, what if fights could be elevated to being not just potential game-changers but quantifiable game winners?

This shortened season has provided two controversial statistics: a marked rise in both the number of fights and of games won in the shootout. Both phenomena have caused various fans to call for each practice to be banned or to have its role diminished, but I'd rather solve the one problem with the other rather than eliminate either from the equation.

Here's what I'm proposing: at the end of OT the coaches have the option to decide the victor by shootout OR single combat. In other variations, the visiting or home coach decides which method to pursue for awarding the extra point or the refs flip a coin to determine how the game will end. Anyway, either a skills or spills competition will end the game. This method makes fighting a vital to the the game and honours its role in hockey history by uniting it with an even older pugilistic practice.

After all, single combat was used to decide the fates of the Israelites when David fought Goliath; of the Britons when Nennius fought Julius Caesar; and of the Norwegians and Danes when old Fortinbras fought old Hamlet, so why shouldn't we turn to this centuries-old tradition to settle stalemates in hockey?

In case fans are worried their team might lose because their champion is having an off night, each team could send three fighters for the single combat. The game would be decided by whichever team wins the best of three bouts. If they're tied, then just as in the shootout, teams would turn to their benches for extra fighters. This way, we'll have all the excitement of a bench-clearing brawl with all the orderliness of a registrar's office.

Oh, and if a player beats up the other team's entire bench, his team automatically wins the game regardless of whether it's in OT or regulation. We'll call this the "Darcy Tucker rule."

Now, you're probably thinking that I'm just a biased Leafs fan whose team leads the league in fights but doesn't have a single player not named "Bozak" with a shootout goal this year. You're right, but surely we can agree that deciding the winner with a skills competition is just as arbitrary as trial by combat.

Furthermore, I've heard fans complain that teams resort to boringly conservative play during OT because they don't want to screw up and miss a chance of eking out a win in the shootout. The fear of getting their faces punched in if the post-OT combat requires extra fighters will surely make the faint of heart take greater risks to win the game in OT.

If you're still not convinced, ask yourself one question. Which is more exciting to watch-- 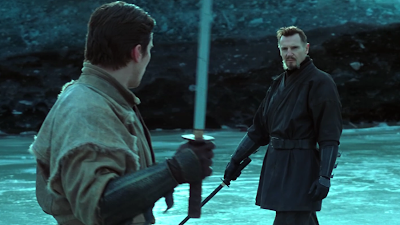