Earlier today it was reported that Jonathan Bernier is being considered for the 2013 Masterton Trophy.

Right on the heels of the announcement, Bernier has requested a trade. He's hoping to swap the award with whomever wins the Hart trophy, but he says that he'll settle for the Lady Byng or even the Geller Cup. 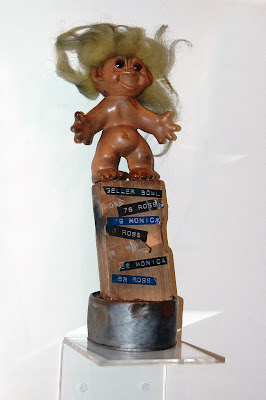 This Friends relic is considered the highest honour awarded for pettiness in the field of athletic achievement.


A source who identified himself as Bernier's LA poutine connection informed me that Bernier openly derided his nomination, saying, "what did I persevere through? The adversity of finally getting a chance to do my job while Quick was on IR?"


Reports of Bernier's displeasure do not come as a surprise as he has often complained about being relegated to playing backup for Kings starter Jonathan Quick last season. The team only added further insult to Bernier's non-injury related reasons for by sending him a participant ribbon rather than a Stanley Cup ring following the Kings championship, which was predicated on Quick's Conn Smithe winning performance as LA's crease curator.

Meanwhile, a ficus located in the NHL's New York office leaked that the award probably stems from an unreported incident that afflicted the Kings backup netminder during the 2012 off-season. Bernier's ego suffered a near career-ending injury when nobody cared about him first asking and then declaring his expectations to be traded. If he hadn't immediately received emergency silent treatment from the team's medical staff, he likely would have succumbed to a common disease among disaffected goaltenders (acute Hissy Fit-itus). Bernier has denied these reports and attributed his injury to an unrelated incident involving pancakes. (Hey, that excuse worked for Penner, right?)