Last night's Oilers-Coyotes game ended in an infuriatingly interesting way for Edmonton fans: with over two-and-a-half minutes left in the game, the Oilers pulled goalie Dubnyk for the extra attacker. After incurring a penalty over a minute later, they reinserted Dubnyk for the PK, and the Coyotes promptly scored. These events inspired me to play anarchist armchair coach today. 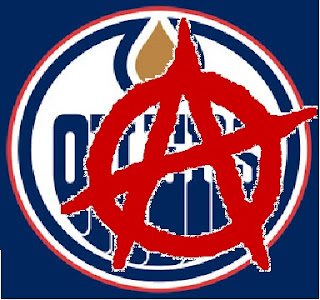 Following that game-spoiling goal, a lot of people were probably thinking, "Why even bother having a goalie in the first place!?!" And yet those same people would probably think that the Oil should put either Dubnyk or Khabibulin in net for the next game. To that I would say, "Did you learn nothing from last night? Shouldn't the Oilers stick with icing six skaters from now on?"

During the eighteen-wheeler's plummet last year, the Leafs ended many losing games by pulling their goalies. While they rarely got the equalizer goal(s), the Leafs did have an impressive streak of not having empty-net goals scored against them. Unfortunately for my insane machinations, the Leafs are doing better this year so I haven't been able to propose that they ice six skaters and no goalies. But now, hopefully, Edmonton's desperation has renewed interest in the topic.

Surely the Oilers have the offensive talent to keep the puck in the attacking zone for most of the game. They'll need a goalie for a few minutes at the beginning of periods, when killing penalties, and after goals, but other than that, they should have faith that Hall, Yakupov, Eberle, Nug-Ho (that's my nickname for Nugent-Hopkins, and I'm sticking with it), Gagne, Paajarvi, and J. Schultz have the skill to hem the puck in the opponent's zone. After all, my wrists are feeling repetitive strain just from having to type out the names of all their star-calibre players!

Aside from generating interest among non-Oilers fans, icing six skaters for the majority of the game would be instructive. When a team tanks, onlookers inevitably opine as to whether defensive lapses or inept goaltending is to blame. By removing the goalies from the equation, commentators will be able to weigh in on this age-old debate with better statistics. Meanwhile, the young players may learn to develop a stronger esprit du corps and respect for their goalies when they have to bear the burden of every goal against.

Or perhaps it will show the world that Edmonton really needs a better goaltender as having none is keeping them more competitive than icing either of their current options in net. In which case they can send a signa

Of course, there's a strong chance that forcing the young Oilers to fend for themselves will quickly make the team devolve into Lord of the Flies levels of depravity. But, on the plus side, Oil Change will become both a gripping reality TV thriller and a critically acclaimed anthropological study on the dark side of human nature. 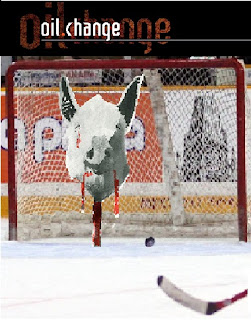