Grinders of Grunge: Things I Learned at the HHOF Part 1

Some argue that Pearl Jam originated grunge music and others, Nirvana. Some see Neil Young as the prototypical grunge rocker, but others trace grunge's roots back to 70s punk rock. All these conceptions, however, are wrong as the true originators of the Seattle style that dominated 90s pop culture were the Seattle Metropolitans hockey club. This picture should settle the matter once and for all. 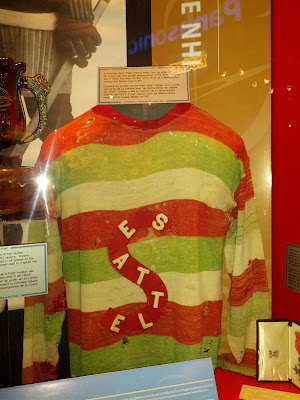 Unwashed, torn, faded, and disenfranchised (as the sweater explained to me) by an establishment that refuses to mention Seattle's defunct team when discussing its favorite children--the original six (or "total sell outs" as the sweater calls them). This sweater is also almost entirely ignored by the "suits" visiting the hall (except for the occasional passerby who mistakenly tosses it some change).

This sweater is so mopey that even it's letters are sulkily slouching down as to avoid eye contact. I wouldn't be surprised if it somehow penned Pearl Jam's "Jeremy," or if we could hear the faint sound of Nirvana's "In Bloom" when we put this relic up to our ears.

In case anyone thinks this picture reflects the age rather than the attitude of the team, the picture (taken from a contemporary magazine following their Stanley Cup victory) below illustrates that grunge formed both the style and substance of the Seattle Metropolitans: 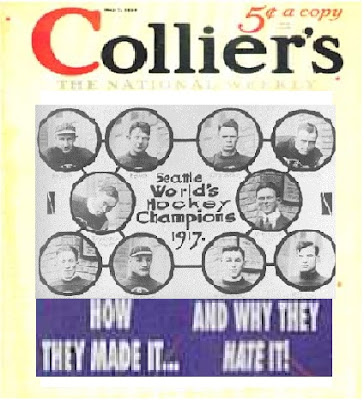