The Agony and the More Agony

The Leafs, as Michael Langlois has pointed out, veered into their first true losing streak of the season following Tuesday’s loss to the Jets. Most fans would see a rough skid like this as inevitable for any team and, therefore, no reason to panic. Leafs fans (at least those like myself) cannot dismiss the fear that this rough patch will turn into a path of scorched earth that will lead this team to another top five draft pick.
Last season’s dismal end for the Leafs prevents fans from feeling any confidence in the team. A one-goal deficit seems insurmountable and a three-goal lead appears precarious. If the Leafs tank again and miss the playoffs this year, Leafs fans will likely never believe that the team has a chance to win a game again. Even 6-0 beat downs like the one against the Habs last month will be written off as a fluke or a league-wide conspiracy to get the fans’ hopes high again before plunging them into the abyss that is hockey-less Toronto in May.

That bleak vision is likely the eagerly anticipated future for at least one hockey insider. The NHL scheduler, knowing the Leafs tend to tank for half of any season, must have had a restless night in which he woke up frequently in fits of laughter after arranging for the Leafs to play the first of their last 24 games in the 2013 season against the Bruins. Coincidences are rarely so poignant and malicious.

Ultimately, it’s the team itself that torments the fans by releasing hope from Pandora’s box before shaking out all the terrors of the earth upon them. This team has been consistently maintained a spot in the lower half of the Eastern Conference’s top eight over the short season. There hasn’t been any of that ridiculousness like last year when they led their division and even the league for a brief time. No, these Leafs practice better decorum—winning and losing games in a way that makes them look capable but not arrogant, which raises reasonable expectations in fans without setting them up for a huge embarrassment in the long run. 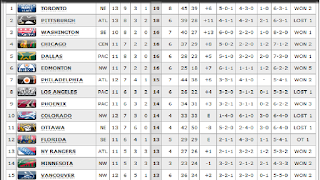 Last year's team flew their 18-wheeler too close to the sun, causing the maple syrup holding everything together to melt.

Some will read this gloomy blog as a hysterical response to a mild hitch in the team’s current performance, and those readers are right to some extent. Nevertheless, I’m forecasting the Leafs’ continued losses and likely failure to make the playoffs for two reasons. First, if it happens, I want to be able to point to this post as proof that I saw it coming so that other fans can’t claim that my pessimism toward the team was pieced together from hindsight and that I was as uncritically enthusiastic about the Leafs’ early fortunes as everyone else. If I’m wrong, I will be too busy watching Leafs playoffs games to be bothered by being wrong.

Second, another spectacular failure like last year might be a mortal wound to the Leafs fan base. This year, I’ve noticed that fans have watched games with apprehension. If the Leafs tank again this year, apprehension might turn to incredulity toward the team’s ability to win. If they again frustrate whatever meagre expectations can be raised, then fans might just resort to apathy as a defence mechanism that blocks them both from experiencing any disappointment but also joy associated with the team’s performance. Apathy is particularly dangerous for a sports team as it resists both future injury and future remedy (renewed enthusiasm for the team). If these events coincide with an expansion team moving into the GTA, then the Leafs might find themselves both fanless and winless.

Randy Carlyle and Dave Nonis try to temper expectations by continually insisting that they have no expectations for this team as it continues to rebuild, but the team’s performance halfway through the season is stoking expectations nonetheless. Maybe the fans should (like moths with singed wings) blame themselves for being drawn into the alluring flickers of hope that the current Leafs roster has glanced on the future. Regardless of what expectations should be and who’s to blame for disappointment, no team in the league (except perhaps the Jets for fear of their fanbase evaporating) needs to make the playoffs for the sake of just ‘cause more so than the Leafs. Even if they get swept, breaking the playoff drought and giving fans something to point to as a marker of improvement will show that this team has begun (however the slight the angle might be) to turn a corner.